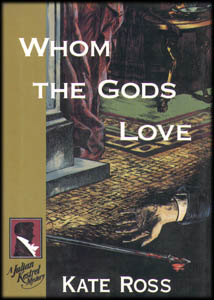 Alexander Falkland hasn't an enemy in the world. Young, talented, charming, he shines in every field he enters: law, architecture, the investment market. But one night his luck runs out with a vengeance. In the midst of one of his famous parties, he is found in his study with his head smashed, a blood-stained poker beside him. No wonder the inscription on his gravestone reads: Who The Gods Love Die Young.

When the Bow Street Runners fail to solve the crime, Alexander's distraught father turns to Julian Kestrel, elegant dandy and intrepid amateur sleuth. Soon Kestrel is up to his ears in suspects:

But the greatest enigma is Alexander himself, who was he really? Social reformer or butterfly, devoted husband or rake? In this, his third murder case, Julian must peel off one mask after another, till at last he discovers an Alexander no one knew -- except, perhaps, the killer.

"With the third entry in Kate Ross's series set in 1820s London, dandy-about-town Julian Kestrel ascends to his much deserved place among the greatest amateur super-sleuths of all-time ... you can't read fast enough."
The Drood Review of Mystery

"In a tale as sparkling as champagne (with a dash of arsenic), Ross motivates her characters with human desires ranging from the loftiest intellectual yearnings to the basest physical appetites. Offering this level of entertainment, her dandyish sleuth will never go out of fashion."
Publishers Weekly