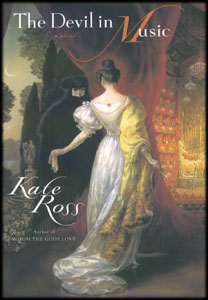 On a mist-shrouded villa on Lake Como, an Italian nobleman is grooming a young English tenor for a career on the glittering operatic stage. But the enigmatic singer and his fiery mentor constantly clash. Before their sojourn is over, one will die by violence, and the other will disappear.

Enter Julian Kestrel, Regency dandy and amateur sleuth. Travelling in Italy with his ex-pickpocket valet, Dipper, and his friend, Dr. MacGregor, Kestrel is irresistibly drawn into this baffling murder case. Among the suspects are a runaway wife and her male soprano lover, a liberal nobleman at odds with Italy's Austrian overlords, a mocking Frenchman with perfect pitch, and a beautiful, clever woman who begins to haunt Kestrel's dreams. Soon Kestrel is caught between the shadowy Carbonari -- secret rebels against the Austrians -- and the equally ruthless Austrian-sponsored police. But at the heart of the mystery is the captivating tenor known only as Orfeo. Was he a political agent? A callous adventurer? A jealous lover?

These questions take on new urgency when the murderer strikes again. And as Kestrel uncovers the truth, he risks becoming the next victim."

The Devil In Music is the winner of the Agatha Award for Best Novel of 1997 and was nominated for the Dilys Award by The Independent Booksellers Assocation.

"The reason Kate Ross is such a marvellous writer of historical crime novels is that she not only knows her period, she feels it as well."
Robert Barnard

"Thank you so much for sending Kate Ross's The Devil In Music. What a thrilling book; it is her best yet. It has everything: romantic intrigue, suspense, a truly ingenious puzzle, and a remarkable deepening of Julian Kestrel's character. It opens up new vistas for the series."
Sarah Smith

And finally, a few words from Kate. I had to upload this little snipet of text... well... because my name appears here. I was most impressed... blown away was more like it. Many thanks Kate.