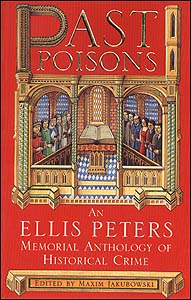 Kate Ross was a trial lawyer with a prominent Boston law firm and the creator of a wonderful historical sleuth, Julian Kestrel. Her character was a Regency dandy irresistibly drawn to baffling cases in the colorful setting of mid-nineteenth-century Europe. He appeared in four novels, a, b, c and d.

When approached to contribute to this anthology, Kate chose to create a new female character, who she hoped would become the linchpin of a new series set a quarter of a century earlier. 'The Unkindest Cut' is the first story featuring Harriette Wilson, and she proves to be a particularly unusual and endearing heroine. Sadly it will also be the last Hattiette Wilson story.

Kate Ross dies of cancer at the age of only forty-one shortly after completing the story. She will be as sorely missed as Edith Pargeter.

Today's best American and British authors are featured in this outstanding collection of original historical mysteries. The stories in Crime Through Time span thousands of years -- from Steven Saylor's ancient Rome to Anne Perry's Victorian England -- and feature an amazing variety of detectives -- from Peter Lovesey's Prince Albert to Maan Meyer's Charles Dickens to Laurie King's Mrs. Hudson, housekeeper to Sherlock Holmes and a star sleuth in her own right.

These twenty-one historical whodunits were written specifically for this volume and are appearing for the first time in print. Edited be bestselling authors Miriam Grace Monfredo and Sharan Newmon, this one-of-a-kind anthology will appeal to history buffs, mystery buffs, and anyone who loves a good story.