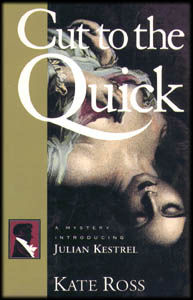 To the ranks of great sleuths of ages past, add a new candidate -- Julian Kestrel -- a detective as historically authentic as Brother Cadfael and as dashing as Lord Peter Wimsey. Kestrel is the reigning dandy of London in the 1820's, famous for his elegant clothes and his unflappable sangfroid. One night he rescues a young aristocrat named Hugh Fontclair from a gambling house, and in gratitude Hugh invites him to be the best man at his wedding. But when Kestrel goes to stay with the Fontclairs at their sumptuous country house, he is caught in the crossfire of the bride's and groom's warring families. Soon, discord erupts into murder.

In a world without fingerpriting, chemical analysis, or even police, murder poses a baffling challenge. Undaunted, Kestrel sets out to solve the crime. With the help of his Cockney manservant, Dipper, a (mostly) reformed pickpocket, Kestrel delves beneath the Fontclair's respectable surface. What he finds is a trial of crime, deception, and forbidden lust leads him at last to the killer.

The combination of a new author, a charming new sleuth, and a strikingly original setting adds up to a smashing mystery that moves with force and intelligence -- and expert suspense -- from beginning to end.

"Kate Ross combines polished writing with originality, historical accuracy, and a genuine gift for creating intriguing characters and situations. If I can't have more of Lord Peter Wimsey, at least there will be Julian Kestrel to look forward to."
Mystery News

"Agatha Christie fans should read this first mystery. ... The plot is intricate, and Julian Kestrel, a sophisticated and attractive man of his time, promises to be fun to get to know."
Napa Valley Register

"Whodunit is only the climactic revelation in a tale that crackles with contemporary tension."
Kirkus Reviews

"I have never read a debut novel that reads less like a debut. She has brilliant command and a gift for characterization and atmosphere."
Robert Barnard